Our start in Horseshoe Manufacturing

The Omega Horseshoe Company is a family-run small business headquartered in horseshoe-historic Utah (host of more World Tournaments than any other state). Founder, Dennis Ohms, was surrounded by everything-horseshoes his whole life. In the 1950's Dennis first met the “Father of Horseshoe Manufacturing,” John Gordon. Gordon’s “Spin-On” shoe was revolutionary with its stake-grabbing hooks, squared shanks, and inverted ringer-breaker designs. It quickly became a widely popular horseshoe and won many World Championships. During the decade of World Tournaments held in Murray, Utah, Mr. Gordon sometimes stayed in Dennis’ parent’s home. Dennis’ Father, Ray Ohms, began pitching competitive horseshoes in the 1920s and was instrumental in the resurgence of the NHPA after WWII; he later became a Hall-of-fame member with the NHPA. Dennis recalled his father and Mr. Gordon talking horseshoes late into the warm July nights. Gordon was always working to improve his shoe and regularly sought suggestions for improvements from horseshoe pitchers. Young Dennis was thrilled when Gordon asked him what he thought of the horseshoe and he gave Mr. Gordon his best ideas. Not too long after a new design for a shoe to be called the “DenORay” was created. Unfortunately, Ray and Mr. Gordon both passed way before it was manufactured. From that early exposure to Mr. Gordon and horseshoe design/manufacturing the stage was set for Dennis to one day save the Gordon shoe. 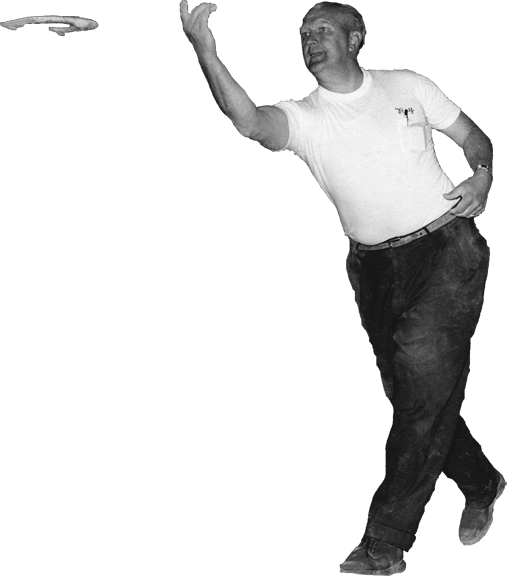 As an adult, Dennis dedicated much of his energy to the promotion of the sport of Horseshoe Pitching.  For over 3 decades Dennis served as a national distributor and provided horseshoes and game-related items to thousands upon thousands of horseshoe pitchers, from professional world champions to backyard hobbyists.  In addition, he established the Southern Utah Horseshoe Pitchers Association and served for over 30 years as its president, culminating in winning the bid to bring the World Tournament back to Utah in 2013 and again in 2017, where he too was inducted into the NHPA Hall-of-Fame.

After Mr. Gordon’s death in 1959, Queen City Forging in Ohio continued to manufacture the Gordon shoe with one major redesign in 1969. By the beginning of the 21st century the global forging industry had evolved to the point that Queen City decided to terminate production of the Gordon in favor of more profitable items. Determined to preserve the iconic Gordon horseshoe, Dennis negotiated the purchase of the Gordon shoe from Queen City and established the Omega Horseshoe Company in 2006.

Dennis invited his family to assist in the new business endeavor and, as such, every aspect of the business today is carried out or overseen by the Ohms Family (design, testing, forging, packaging, sales, marketing, orders, shipping, etc…). After stablishing Omega, one of the first tasks was to bring back the early John Gordon-designed Spin-On horseshoe. Since the modern design now carries the Gordon name, it was re-named “Legend” in honor of all the legendary greats of the sport who pitched it or helped perfect it. Today the modern Gordon and Legend-ary Gordon continue to spin-on stakes, ringer - after ringer - after ringer.

Elevate your game and pick up a pair of Gordons or Legends today.

What’s in a Name?

The naming of our company “Omega” Horseshoe was no simple coincidence.

The first key element is the Omega symbol itself. It is, of course, depicted as an old-style horseshoe “Ω” and takes the place of the “O” in our branding of Omega! The next element is the meaning of the Omega. The symbol is used as a measure of electrical resistance, which is called “Ohm,” named for German Physicist Georg Simon Ohm who developed “Ohm’s Law.” The founder of Omega Horseshoe Co. is Dennis Ohms (naturally of German decent)! “Ohms,” as units of measure for electrical resistance, are often found listed on electrical equipment depicted as “Ohms” or “Ω” (take a look). The connection of these two elements make up the foundation of our branding as Omega Horseshoes. Omega = Ω = Ohms = Ω = Omega…

As cool as that connection is, there is even more to it.
Omega is the last letter in the Greek alphabet. It is generally accepted that the earliest roots of the game of Horseshoes were developed in ancient Greece! Also, as the last letter in the Greek alphabet, Omega is regularly used to represent the “End” or the final culmination. This is the most fundamental connection to Omega Horseshoe Co.; our Horseshoes are the “End” to your search for the best pitching horseshoes on the planet and our Gordon roots represent a vast culmination of Horseshoe development, refinement, and performance.